Really Spicy Opera has been led since its inception by founder and artistic director Basil Considine. A biracial opera scholar and conductor, Basil produces each season and directs several of the mainstage works performed by RSO. He is also a composer and playwright, having studied playwriting with the nationally recognized playwright Lydia Diamond and opera composition with the noted composer Samuel Headrick.

Basil is a lifelong musician and a Boston-area native, having graduated from the Boston Archdiocesan Choir School in Cambridge (now the St. Paul’s Choir School) and attended the Suzuki School of Newton, the New England Conservatory of Music Preparatory School, and the Coronado School for the Arts. He is an alumnus of the University of San Diego, where he studied music and theatre, and holds a master’s degree and a PhD from Boston University, where he studied music, theology, history, and drama. An expert choral musician, he has also directed numerous church choirs and concert ensembles in San Diego and the Boston area. He has sung in Boston’s Symphony Hall and New York’s Carnegie Hall, and counts as one of his finest performances a soloist engagement with the BSO and the Tanglewood Festival Chorus. In RSO productions, he rotates through different creative roles as producer, stage director, and musical director, while also serving as the resident scenes coach for musical theatre and opera performances.

Basil is a passionate advocate for new music, for using theatre in socially and educationally relevant ways, and in the power of the arts to inspire and engage youth. He was the founder and musicianship instructor in the community music program Vie Musique, providing musical entertainment and instruction to at-risk youth living in Roche Bois, the largest urban slum on the island of Mauritius. He was named to Musical America‘s Top 30: Movers & Shapers list in 2017 for his work in music and theatre education. 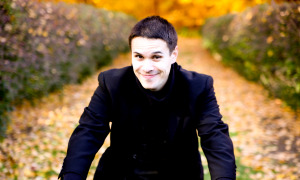 In 2012, Basil’s play The Abortion Bomb was premiered by Forearmed Productions at the Plays and Players Theatre in Philadelphia. His parody Game of Thrones: The Musical was awarded the Twin Cities Arts Reader’s Best of Fringe and Critic’s Pick awards for the 2016 Minnesota Fringe Festival. His opera The Frat Party was named a semi-finalist for The American Prize in Composition for 2017-2018. Basil’s writings on P.G. Wodehouse are available from Routledge and his writings on Italian opera are available from Brepols.

Basil served as the Regional Governor of the National Opera Association’s North Central Region from 2014-2015. He was named a Walden University Changemaker in 2016, and is the President of the Society for Ethnomusicology’s Religion, Sound, and Music Section. He is also one of the co-directors of the Morningside Theatre Company.