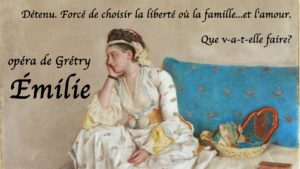 Why is Really Spicy Opera is performing a Grétry opera in 2020? And how did the 2020 tour come together?

The short answer is to highlight an important but forgotten work in political, economic, and musical history. The opera in question, Émilie, ou la belle esclave, was commissioned by Marie Antoinette – one of several important artistic patrons whose work we are highlighting in our Women in Opera History Initiative. For a variety of reasons, this opera and its unique importance were left out of the writing of musical history, and reviving it both addresses this gap and allows new audiences to experience this beautiful, stirring opera for the first time in centuries.

The longer answer starts with a chance meeting in Paris at the Bibliothèque Nationale de France in December 2010, when I met Dr. Julia Doe (now on the faculty of Columbia University). At the time, we were both doctoral students working on our dissertation research on late-18th century French opera. I was working on opera in Mauritius, and Julia was working on Grétry and opera comique during the French Revolution. Since then, we have both ‘backed up’ our research to focus on the period right before the Revolution.

You can read about Dr. Doe’s research in Studies in Eighteenth-Century Culture, the Journal of the American Musicological Society, the Opera Journal, and other places, but I am most excited about her upcoming book The Comedians of the King, coming in Fall 2020 from University of Chicago Press. Among other things, she describes the key role of Queen Marie Antoinette of France in directly shaping and changing operatic tastes in the musical capital of Europe. Dr. Doe’s research inspired the archival investigations that led us to pick Émilie to perform.

Émilie is a very interesting case: a Grétry opera that was performed exactly once, but in an incredibly lavish and expensive production that included a 3-act ballet and a full symphony before the opera even began. Tragically, the opera house burnt down shortly thereafter, taking with it the luxurious and very costly sets and costumes…and making it prohibitively expensive to remount. The score was also miscatalogued in the opera archives for many decades, and the opera confused with later operas with similar names…including its own parody.

As far as Marie Antoinette’s role in this, you should come to our performances at the Fondation des États-Unis (January 16) and the Bibliothèque Nationale (January 17) to find out more. I’ll just say that the reasons why this opera was performed are intimately bound up in U.S. and French history and the financing of the American Revolution.